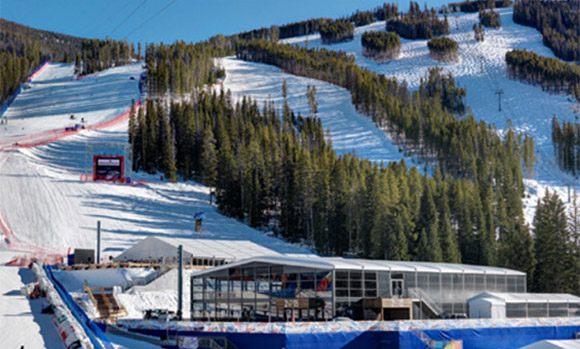 From Austria to Canada and everywhere in between, the most talented skiers in the world descended upon Colorado’s Beaver Creek Mountain in February 2015. It was the third time that the prestigious International Ski Federation’s Alpine World Ski Championships was held in the Vail Valley, this time in the town of Avon.

Only second to the Olympics, the World Championships is the largest gathering of ski racers in the world. As a result, organizers needed to set up a temporary facility to accommodate the countless TV and radio broadcasters scheduled to cover the races. The facility, known as The International Broadcast Center, was constructed out of shipping containers—one per country. Broadcast and fi lm-editing services were performed there nearly 24/7 during the two weeks of racing.

Located on the very edge of the ski course was another temporary facility, called the VIP Building, for platinum ticket holders. Its walls were made of glass, allowing spectators to watch the races right outside the windows.

Though not required by local code enforcement to install a fi re alarm system within the temporary buildings, organizers decided to do so as a precaution.

“They concluded it would be a good idea to have some form of fi re protection in the buildings in case something happens, especially with all the electronics in the broadcasting facility,” said Tim Ward, NICET IV, general manager at Commercial Specialists of Western Colorado.

The structures would be taken down soon after the race, so organizers did not want to waste time pulling wires across the buildings to support the fi re alarm system’s assorted field devices. Coupled with a tight deadline for installation and tear-down, it made sense to turn to wireless smoke detectors.

“Because of the ease of installation, it was just the perfect solution to go wireless,” said Joe Quinn, service manager at Commercial Specialists of Western Colorado. “By running a wireless system, we knew it would be beneficial because all we would have to do is place our bases and do the programming.”

Saving time was imperative; however, the amount of labor and materials costs eliminated with the wireless system turned out to be significant.

Commercial Specialists of Western Colorado met all the deadlines for the fire alarm installation as the wireless project came together quickly. With a traditional wire detection system, they would have spent at least two more weeks onsite, running wire. Such a speedy installation saved them time and labor; the wireless devices cost more, according to Ward, but the amount of time they saved in labor made up for more than the additional cost. Ward and Quinn both said they were very pleased with the incredibly quick installation period of three days for the wireless devices.

“I had one of my workers trim out an entire floor in less than 30 minutes,” Quinn said. “The nice thing is you can screw them right to the deck and then you’re done. I honestly thought we would be there all day, but he came back quickly and said he was done. I was really impressed with that.”

To install the system, Quinn simply had to program a distinct system profile for each device; insert the batteries in each; install the devices in their specific locations; and launch the mesh network formation routine, which automatically evaluates the signal strength between all devices and creates all of the primary and secondary communication links for the mesh.

“It was my first time with wireless, and I would absolutely do it again,” he added. “This was one of the easiest installs I’ve ever been a part of. Everything came together really nicely.”

For the lavishly designed VIP Building, the aesthetic advantages of using SWIFT came into play, according to Quinn. They didn’t want to run a bunch of red fi re alarm wires all over the building where they would be visible. In addition to wireless detectors, wireless monitor modules were used to support fi re pull stations.

Quinn lauded the system’s transparency, claiming it to be “absolutely cosmetically beneficial.”

Ward said he’s worked with other wireless systems, but has never seen such reliability before. SWIFT is designed to provide maximum reliability. The SWIFT system’s proprietary protocol uses supervised, redundant communication paths to ensure that event data reaches the fire alarm control panel. Signal strength for each communication link is evaluated, and the initial system setup automatically incorporates a safe margin to ensure that routine variations in the environment will not disrupt communication.

In a Class A mesh network such as the one used by SWIFT, each smoke detector and monitor module creates its own communication structure. That means communication goes from point A to point B through any number of these devices, creating redundant communication paths. With multiple paths to employ, the system’s reliability is maximized; if one communication path is blocked, a system will use redundant pre-configured paths, or even establish new paths to insure that all transmissions reach the fire alarm control panel.

For facilities with existing NOTIFIER systems planning to grow, the SWIFT detectors offer an easy solution for protecting the new space. NOTIFIER’s ONYX Series systems work with any combination of wired and wireless (SWIFT) devices.

“The expandability of the system is a huge benefit,” Ward said. “You can keep adding on as big or small as you want to fi t your application.”

Beyond reliability, speed of installation, cost savings and aesthetic appeal, SWIFT can really benefit those facilities where the installation of wires is nearly impossible. To avoid drilling and running wire through concrete, decorative ceilings, historically signifi cant structures and even areas where asbestos is present, the use of Smart Wireless Integrated Fire Technology just makes sense.