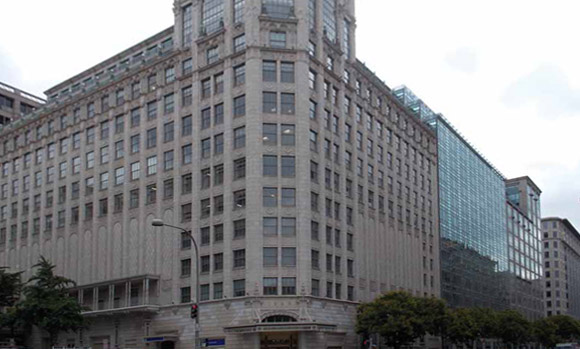 While wrestling with a failing fi re alarm system, the owners of a prominent Washington, D.C. property, comprising a high-rise building and theatre, decided to upgrade to a new fi re alarm and emergency communication system (ECS). The real estate and building management company was looking to upgrade to a more intelligent, intuitive system that could increase safety in both buildings, quickly detect and clear smoke during fires, and offer more occupant communication capabilities.

Built in 1924, both buildings feature award-winning architecture throughout. The high-rise of mainly offices and retail space, includes a nearly 200-foot-high atrium lobby that stretches from the ground floor to the penthouse. The theatre continues to host big-name performances from Broadway musicals to the biggest icons in comedy and music.

Over time, the buildings’ management began to encounter frequent problems with the structure’s old fire alarm and more of the system components were becoming obsolete.

“It was a dinosaur,” said David Dunnington of Adcock Systems, the NOTIFER distributor that designed, engineered, installed and now services the project. “It was giving building management a multitude of issues and that’s why they decided to replace it.”

The old voice evacuation system did not support emergency communications for threats outside of fire. Management sought a system that would allow live paging, recorded fi re evacuation voice messages, and additional messages pertaining to other kinds of emergencies, which could be added down the road. The high-rise building’s fi re fi ghter phones were also dated and it was imperative for fire fighters to have a means for two-way communication when their radios are down.

The atrium was another challenge that needed a system that could detect and clear smoke from the colossal space quickly.

The theatre side of the property was protected by the same legacy fi re alarm system and replacing it would be more diffi cult, since its historic building status prohibits any cutting or patching. As a result, choosing a system that could use a good portion of the theatre’s existing infrastructure was imperative.

After surveying the market, the buildings’ management decided on a complete fire alarm retrofit, installing new NOTIFIER NFS2-3030 addressable fire alarm systems – one in the high-rise and one in the theatre. The NFS2-3030 comprises a modular design that allows it to fit the needs of medium-to-large scale facilities, supporting up to 3,180 addressable devices.

The new system was confi gured with a channel for live paging and a channel for a voice evacuation messages. It includes a NOTIFIER DAA model digital amplifier system with two amplifiers on each floor, allowing managers to add more customized emergency alerts at a later date. New state-of-theart fireman’s phones were also installed.

The retrofit comprises advanced detection technology, such as beam detectors throughout the atrium for smoke detection. Through the NOTIFIER network, the beam detectors can quickly activate two massive air supply fans on the ground floor of the high-rise building’s atrium and four smoke exhaust fans in the penthouse to pull in fresh air and push out smoke. Management opted for Fire Alarm Aspiration Sensing Technology (FAAST) from System Sensor in the highrise.

The FAAST aspirating smoke detector (ASD) integrates directly with the loops on the NFS2-3030 systems just like any other detection device. Through its Modbus/TCP communication, FAAST allows seamless integration with building management systems, which simplifies installation and reduces cost and complexity. FAAST is being used for more efficient return of distributed air to the air handling units (AHU) in the offi ce building. With two AHU units on each floor, FAAST technology allows for extra system longevity and requires less oversight and maintenance.

“Instead of dealing with your typical smoke detectors in front of a mechanical return, the FAAST system reduces maintenance cost over the lifecycle of the system; it allows for quicker testing and you don’t have to deal with cleaning dirty smoke detector heads,” Dunnington explained. “You simply air-blast your sensor tubes for your ASD and periodically change your filters when the detector alerts you that maintenance is required. You no longer have to maintain 8 to 10 individual smoke detectors on the plenum returns per mechanical room. You can simply maintain two FAAST systems per floor.”

Such a large building of countless tenant spaces is bound to be in an ever-changing state. Adcock bypassed the traditional stainless steel annunciator with LED lights that fi rst responders commonly use to discern the location of a fi re in favor for something more high-tech and reliable.

In the high-rise building’s fi re command center, Adcock placed a NOTIFIER ONYX FirstVision unit, which first responders can use to locate and quickly respond to any fire alarm event. FirstVision is an emergency scene assessment tool that can show the origin and migration of a fire, location of emergency alerts, potential hazards or areas of refuge within the affected areas. The graphic interface can be quickly updated to reflect any building changes, making it more reliable and economical over time.

The NOTIFIER equipment’s flexibility was a critical bonus on the theatre side of the building, where installation methods were highly regulated. The old system was slowly taken down while bringing up the new system in its place, without compromising protection.

“We were able to use a lot of the existing wiring and infrastructure, and it went off without a hitch,” Dunnington said.

Investment in Longevity and Life Safety

Since deploying the new NOTIFIER systems, the buildings’ management has been able to take advantage of this new technology’s ease of use, as relayed to Dunnington.

“What they pointed out to us was that they were extremely impressed with how user-friendly the system is and the information it provides you,” Dunnington explained of his customer. “You’re not going deep into menus to do points. It provides individual point disables, so it makes it easy to disable areas under construction, for example.”

Backward compatibility is inherent throughout the entire NOTIFIER line, making it easy for building managers to upgrade or add on to systems without replacing existing devices. As a result, customers can take comfort in knowing that their investment is protected for years down the line.

“The property’s management decided to go with a manufacturer that stands behind its equipment,” Dunnington explained. “Building owners don’t want to spend that kind of money and then fi ve years later have someone tell them their equipment is not supported anymore.”